The following is a tribute to Tsering Gonkatsang written by Ulrike Roesler. 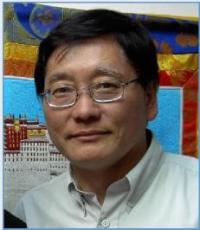 Tsering Dhondup Gonkatsang (སྒང་ཀ་ཚང་ཚེ་རིང་དོན་གྲུབ) passed away on Friday 27th April 2018 after a car accident on his way to work. Tsering has been a tireless champion of the Tibetan people, a passionate and inspiring teacher, and a colleague and friend of the utmost integrity for all those who had the privilege to work with him. He will be sorely missed.

Tsering was born in December 1951 in Sharkhog, Eastern Tibet. He served as a teacher and headmaster at the Tibetan Children’s Village school in Dharamsala, India, followed by higher education in the UK, and ten years of teaching English at an International school in London. From 2001 he was Instructor in Tibetan Language in the Faculty of Oriental Studies, University of Oxford, where he taught Tibetan language and organised cultural events such as the unforgettable Oxford Losar Parties. In addition to his academic work, Tsering was also a Tibetan-English translator, filmographer, consultant for television and radio, Trustee of several Tibet related charities, and published research on topics ranging from Tibetan medicine to historical documents.

Tibetan Studies at Oxford will not be the same without Tsering Gonkatsang. We will miss his energy, his enthusiasm and creativity as a teacher, and his inimitable sense of humour. We are grateful for the time we got to spend with him, and will remember him with profound fondness and gratitude. We send our love and commiserations to his wife Dolker and his children and grandchildren.

Tsering with Alak Zenkar Rinpoche and students in 2016