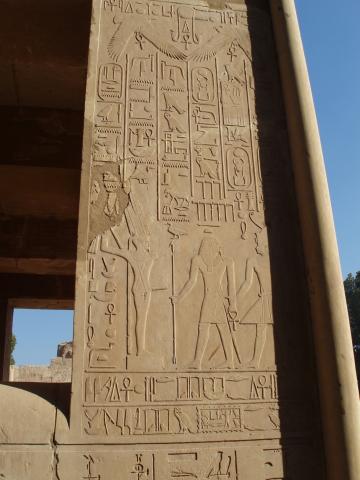 Egyptian was the only written language of ancient Egypt and is one of the few languages that was regularly written in hieroglyphic script. The Egyptian language and script were also used in ancient Nubia and Sudan, as far upstream as the confluence of the Blue and the White Nile.

The earliest known complete written sentence in the Egyptian language has been dated to about 2690 BCE, making it one of the oldest recorded languages known, along with Sumerian. It continued in use for about three millennia, developing through stages known as Old, Middle, and Late Egyptian, and Demotic, directly into Coptic (the language of Christian Egypt, in use from the early centuries CE). Coptic ceased to be a spoken language in about 1000 CE, but survives in the liturgy of the Coptic Church in Egypt. During the second and first millennia BCE the most prestigious form of the language was Middle Egyptian, which was retained in use as a learned language (like Latin) long after it had given way to later forms for ordinary use.

Egyptian is written in a group of scripts known as hieroglyphs, hieratic, and demotic. These are different graphic forms of the same system. Hieroglyphs, which have a pictorial character, were used for formal and monumental purposes, and hieratic for everyday writing and for literary and some religious texts. Demotic developed from hieratic around 700 BCE and gradually took over most of its functions.

Egyptian may also be studied for six terms within the two-year MPhil in Egyptology. This graduate degree has a range of options and is designed for those new to the field and those who have previously studied Egyptian. The one-year MSt in Asian and Middle Eastern Studies (Egyptology) offers targeted research training to students who have previously studied Egyptology at undergraduate level.